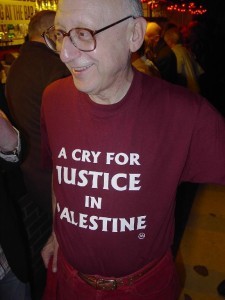 The political correspondent for the UK Jewish Chronicle noted the lack of British media coverage of the antisemitic diatribe elaborated by longtime Manchester Gorton Member of Parliament Sir Gerard Kaufman.

Marcus Dysch wrote on Twitter, “apparently no coverage of an MP’s antisemitic comments outside the Jewish media.”

Kaufman, who is Jewish, came under fire by Jewish groups and some conservatives following comments he made at a Palestine Return Centre meeting on Tuesday, stating that Jewish money, donations and media were behind what he said were the narrow pro-Israel policies of the ruling Conservative party, and accusing Israel of fabricating many of the recent stabbing attacks in which Palestinian assailants were killed.

The comments were published by blogger David Collier, who said he was sickened by both Kaufman’s statements, as well as the antisemitism of supporters who followed Kaufman at the meeting.

One British media outlet that covered the story was The Spectator, which accused the seasoned MP of drawing on “every last trope in the book: a Jewish-controlled media; a wealthy cabal of Jews buying off the political establishment; blood-thirsty Jews jumping at every opportunity to murder the innocent. Some felt that all that was missing was a reference to the Protocols of the Elders of Zion.”

The Spectator called on the newly minted Labor chief Jeremy Corbyn, whose own associations with known antisemites as well as Hamas and Hezbollah have raised a few eyebrows, to condemn Kaufman’s comments and demand his immediate resignation.

The UK-based Palestine Return Centre, which has apparent links to the Muslim Brotherhood and Hamas, distanced itself from Kaufman’s remarks. “Sir Gerald said what was on his mind. We did not have any control over what he said. We have often had events with Sir Gerald, but we have never had him saying anything like this. We do not tolerate antisemitism whatsoever,” a PRC spokesperson told the Jewish Chronicle.

According to the International Business Times, a Labour spokesperson responded, saying, “The views as reported do not reflect the views of the party.”