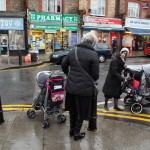 The British education secretary has condemned the Belz community’s decision to ban women from driving, saying the edict was “completely unacceptable in modern Britain.”

Nicky Morgan, who is also the minister for women and equalities, spoke as the Department for Education launched an investigation into the order issued by Belz, which runs two schools in Stamford Hill, north London. A letter to parents said that, from later this year, children driven to school by women would be turned away.

Parents in the area defended the ban on Friday, saying it was part of the choice they made when they agreed to live within the Belz community. Women rejected the characterization that they were oppressed, and the schools wrote to Morgan, saying the notice had been misrepresented.

The group runs Talmud Torah Machzikei Hadass, a boys’ primary school, and Bais Malka, a primary school for girls. Both have been rated good by Ofsted.

The schools had said that, from August, any child driven to school by their mother would be turned away at the school gates. The letter said the ban was based on the recommendations of the Belzer rebbe.

It said that if a mother has no other choice but to drive her child to school – such as a medical reason – she should “submit a request to the special committee to this effect and the committee shall consider her request.”

Morgan condemned the edict, which was first reported by the Jewish Chronicle. In a statement provided to the Guardian, she said: “This is completely unacceptable in modern Britain. If schools do not actively promote the principle of respect for other people they are breaching the independent school standards. Where we are made aware of such breaches we will investigate and take any necessary action to address the situation.”

{Matzav.com Newscenter, The Guardian contributed to this report.}