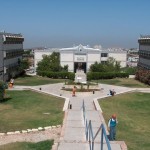 Two scholars from Israel’s Ariel University decided to withdraw from an academic conference in the United Kingdom after conference organizers told them they would not be permitted to reveal their institutional affiliation.

The two scholars, who were not named by the Samaria-based university, submitted scholarly papers to the third annual Conference on Israel Studies hosted by the European Association of Israel Studies (EAIS) at the SOAS University of London from Sept. 14-16. The scholars were told by the organizers that they would not be permitted to represent their university because of its location beyond the 1967 lines.

“The event described is an extreme manifestation of hypocrisy and absurdity. While the conference organizers are interested in research and researchers of Ariel University they are trying to ignore the existence of the institution where these studies have emerged,” Ariel University said Oct. 2.

Founded in 1982, Ariel University has been a target of the anti-Israel Boycott, Divestment and Sanctions (BDS) movement due to its location. The school was granted full university status by Israel in 2012.

EAIS chairman Clive Jones told the U.K.’s Times Higher Education that because of the school’s location, the organization had taken the position that “until the status of the Occupied Territories has been decided between the two parties, we cannot recognize Ariel as a university which is part of the broader Israeli higher educational body.”

“When we had proposals submitted by people working at Ariel, we decided that they were welcome to come and present their papers but would have to give them as individual scholars rather than as academics representing Ariel University,” Jones said.