Michael Flynn resigned tonight as the White House national security adviser after misleading Vice President Mike Pence and other administration officials about the nature of his conversations with a Russian envoy.

In his resignation letter to Trump, Flynn defended his conversations with the Russian ambassador to the United States, saying he intended to “facilitate a smooth transition” and was trying “to build the necessary relationships” for the new administration.

“Unfortunately, because of the fast pace of events, I inadvertently briefed the Vice President Elect and others with incomplete information regarding my phone calls with the Russian Ambassador,” Flynn wrote. “I have sincerely apologized to the President and the Vice President, and they have accepted my apology.”

Kellogg is one of three candidates Trump is considering as a permanent replacement for Flynn, according to a senior White House official. The other two are David Petraeus, a former CIA director and retired general, and Vice Adm. Robert Harward, a former deputy commander of the U.S. Central Command.

Flynn’s resignation – after just 24 days on the job – caps a decorated career in public service for the retired lieutenant general and intelligence official.

In his letter, Flynn said he was “honored to have served our nation and the American people in such a distinguished way.”

“I also am extremely honored to have served President Trump, who in just three weeks, has reoriented American foreign policy in fundamental ways to restore America’s leadership position in the world,” Flynn continued.

The following is Flynn’s resignation letter: 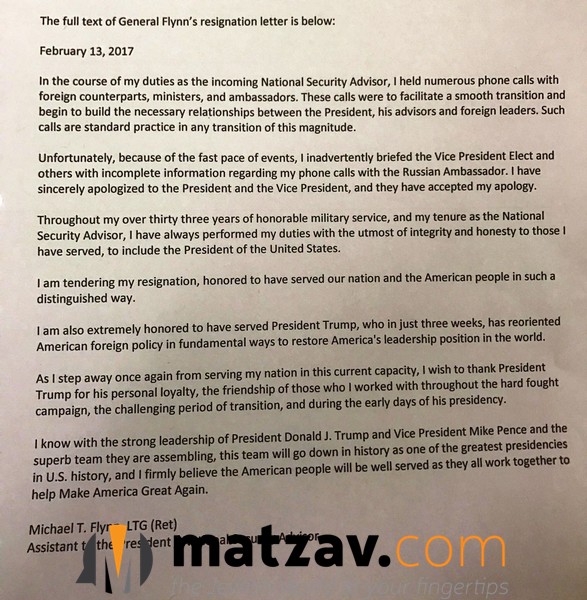