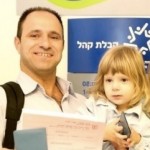 Yaakov Halul doesn’t know it, but on Monday he made history. The 2-year-old from the Galilee village of Jish became Israel’s first Aramean citizen.

Yaakov’s parents, Shadi and Oksana Halul, arrived at the Israeli Interior Ministry in Safed on Monday and received Yaakov’s birth certificate, the first in Israel that listed a baby’s ethnicity as “Aramean.”

Some 130,000 Arameans live in Israel, mainly in villages in the Galilee. Until recently, when a long public campaign ended in a decision by the Interior Ministry to recognize the Aramean people as a separate ethnicity, they were listed as Arabs on identification documents.

“Since the baby was born, my wife and I have refused to get him a birth certificate on which he’d be listed as an Arab,” Shadi Halul said, according to Israel Hayom. “He was a kind of alien. No document. No identity.”

Shadi, 38, served as a captain in the IDF Paratroopers Brigade and now chairs the Aramean-Christian Association in Israel.

“For seven years I have led, along with my friends, the fight to have the Aramean ethnicity recognized and we finally saw it happen. We have preserved the honor of a great people that has survived for thousands of years, despite attacks by different peoples,” he said.