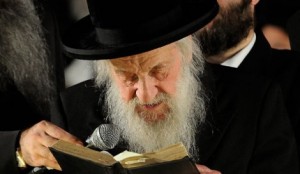 1:05 p.m. EST: It is with immense sadness that we report the passing several minutes ago of Rav Shmuel Halevi Wosner zt”l, senior posek, author of the Shevet Halevi and rosh yeshiva of Yeshiva Chachmei Lublin in Bnei Brak. Rav Wosner was niftar just as Chag HaPesach descended upon Eretz Yisroel. Rav Wosner had been hospitalized at Mayanei Hayeshuah Medical Center in Bnei Brak.

Rav Wosner was born in Vienna, Austro-Hungary, and studied at Yeshivas Chachmei Lublin of Poland under Rav Meir Shapiro zt”l. He was also a talmid of Rav Shimon of Zelicov, mashgiach of the yeshiva.

Rav Wosner married and immigrated to Eretz Yisroel before the Holocaust and settled in Yerushalayim, where he studied at the Dushinsky Yeshiva. It was at that time that, despite his young age, he became a member of the Eidah Hachareidis.

When Rav Wosner relocated to Bnei Brak, at the urging of the Chazon Ish, the Tchebiner Rov, Rav Isser Zalman Meltzer, and Rav Yitzchok Halevi Herzog, he established the Zichron Meir neighborhood and Yeshiva Chachmei Lublin, bearing the same name as the one in Lublin where he studied in his youth.

Rav Wosner was the author of several prominent works, including Shevet Halevi, a comprehensive set of shailos uteshuvos comprising ten volumes, and several other seforim all bearing the same name.

His sons include Rav Chaim Wosner, formerly dayan of London’s Satmar community, who moved to Bnei Brak to assist his father; Rav Bentzion Wosner of Monsey, New York, who is the av bais din of the Shevet Halevi Bais Din; and Rabbi Yosef Wosner of Brooklyn, New York.

The passing of Rav Wosner is truly the end of an era, plunging Klal Yisroel into mourning with the petirah of the gedolei Torah of our day.