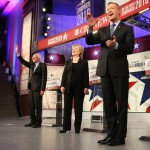 CBS brought in the second Democratic debate seven minutes under time, giving Iowa Democrats the chance to catch the end of the No. 5-ranked Hawkeyes’ game against the Minnesota Golden Gophers.

The candidates began their closing statements with more than 10 minutes to go until the scheduled 11 p.m. conclusion, with Bernie Sanders finishing his at 9:52 p.m. local time. Moderator John Dickerson cut to a commercial break, returning with final thoughts from the panel and a teaser for the next debate on CBS for the Republicans on Feb. 13 in South Carolina. Read more at POLITICO.