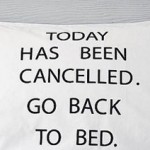 Got a case of the Monday blues? Well, you may not be alone; the most miserable day of the year — Blue Monday — is allegedly upon us.

But how did the third Monday in January get its title? And is there any real science behind it?

Here is what you need to know:

1. Origins of the day

Cliff Arnall, a former lecturer at Cardiff University, was commissioned by a U.K.-based travel agency in 2005 to find the most depressing day of the year as a way to market winter vacations.

2. Why is the third Monday in January so difficult?

Arnall used a pseudo-mathematical formula to pinpoint the most depressing day of the year: he combined weather, debt, motivation levels, the need to take action, and time since New Year’s resolutions were made.

In other words, Jan. 18 is the worst day of 2016 because the cheer of December has worn off, you’ve likely broken your New Year’s resolutions already, it’s cold outside, and your post-spending credit card statement has arrived.

3. Is there any real science behind this?

“No studies or evidence have proved any one calendar date is more gloomy than any others, and the formula linked with the calculation of such a date has no real scientific basis,” Snopes.com wrote last year to debunk the Blue Monday findings.

Dean Burnett, a lecturer at Cardiff University, has also refuted the idea for years, calling Blue Monday a “silly claim (that) comes from a ludicrous equation.”

“True clinical depression is a far more complex condition that is affected by many factors, chronic and temporary, internal and external. What is extremely unlikely (i.e. impossible) is that there is a reliable set of external factors that cause depression in an entire population at the same time every year,” he wrote in The Guardian.

Arnall himself urged people to “refute the whole notion” of Blue Monday.

The designation, he told The Telegraph in 2010, is “not particularly helpful” because it became a self-fulfilling prophecy.

4. But can the weather affect my mood?

Seasonal Affective Disorder is a real condition in which weather affects people’s moods.

The Canadian Mental Health Association (CMHA) says some people “are vulnerable to a type of depression that follows a seasonal pattern,” while about 10 per cent of people will experience mood disorders. Shorter days in fall, for example, can trigger a form of depression that lasts until spring.

5. How can you help those seasonal blues?

The Mood Disorders Association of Manitoba says symptoms of SAD can be treated with light therapy: sitting near “full-spectrum fluorescent lights with a brightness of 10,000 Lux” for 20-30 minutes every morning.