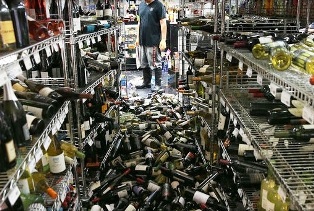 The earthquake that rocked the region also rocked billions of dollars of world-renowned Napa Valley wine.

David Duncan, president of Silver Oak Vineyards, was worried he lost “every single barrel.” Instead, he seemingly got off easy; he only lost three barrels, but they was top quality vintage.

Napa Valley is home to nearly 800 wineries that produce roughly a quarter of the nation’s wine.

The area was already affected by severe drought.

Now the quake’s impact has rippled though the entire economy, right down to the visitors who’ve come here to enjoy the fall harvest.

The impact on the $13 billion wine industry is still unclear.