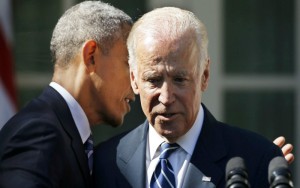 Looking back on his year, Vice President Joe Biden said Wednesday that he regrets his decision not to run for president in 2016, but emphasized it was the the right call.

“I regret it every day but it was the right decision for my family and for me and I plan on staying deeply involved,” Biden said in an interview with Connecticut NBC affiliate WVIT.

The confession is one of the first times Biden has publicly spoken out about his decision since he announced in October he would not seek the Democratic nomination.

Biden, who also has yet to endorse a candidate in the Democratic presidential primary, said “We’ve got two good candidates,” referring to former Secretary of State Hillary Clinton and Vermont Sen. Bernie Sanders. Biden appeared to omit Maryland Gov. Martin O’Malley from his statement. Read more at Politico.