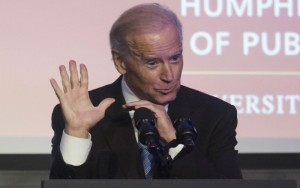 Vice President Joe Biden revised his previous account of his advice to President Obama on the raid that killed Osama bin Laden in 2011.

Biden said Tuesday that he privately told Obama to pursue a raid on bin Laden’s compound after initially telling the president to wait in front of Cabinet officials.

“As we walked out of the room and walked upstairs, I told him my opinion, that I thought he should go but follow his own instincts,” Biden said at an event honoring Vice President Walter Mondale.

Biden also added that he was a part of a small group that knew about the compound as early as August 2010, and that he suggested more drone surveillance at the Cabinet meeting.

The change in narrative comes as Biden considers a presidential run against former Secretary of State Hillary Clinton, who wrote in her book Hard Choices that she supported the raid. Read more at The Washington Post.