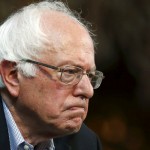 In his opening statement at the third Democratic presidential debate hosted by ABC News at St. Anselm College in New Hampshire on Motzoei Shabbos, Sen. Bernie Sanders of Vermont said he is running because America needs to address “the planetary crisis” caused by climate change.

Sanders also said he is running because “our economy is rigged” and the campaign finance system is one where “billionaires are spending hundreds of millionaires of dollars to buy candidates,” and because he wants a new foreign policy “that destroys ISIS, but…does not get us involved in perpetual warfare in the quagmire of the Middle East.”

I’m running for president because we have a campaign finance system which is corrupt, where billionaires are spending hundreds of millionaires of dollars to buy candidates who will represent their interests rather than the middle class and working families.

I’m running because we need to address the planetary crisis of climate change and take on the fossil fuel industry and transform our energy system away from fossil fuel to energy efficiency and sustainable energy.