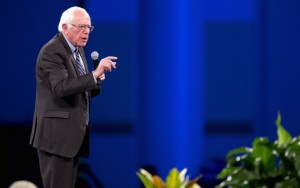 During an address at George Mason University on Wednesday night, Senator Bernie Sanders said he supports removing marijuana from the list of drugs outlawed by the federal government, letting states decide their own drug policies, Gideon Resnick reports for the Daily Beast.

“In the United States we have 2.2 million people in jail today, more than any other country. And we’re spending about $80 billion a year to lock people up. We need major changes in our criminal justice system – including changes in drug laws,” Sanders said according to emailed statement from his campaign.

“Too many Americans have seen their lives destroyed because they have criminal records as a result of marijuana use. That’s wrong. That has got to change.”

In states where marijuana is legal, individual users would not be subject to federal prosecution and marijuana stores could participate in the banking system. Sales of marijuana would be similar to those of alcohol and cigarettes. Earlier this year, Sanders was not willing to comment on legalization and rather wanted to wait and see how states like Colorado functioned before making a final decision.