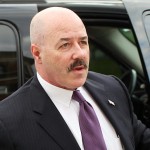 Former New York City Police Commissioner Bernard Kerik told Newsmax that the Paris attacks pointed to an “intelligence failure” that was “extremely concerning” because of the swath of violence was so wide that it required detailed planning that had not been detected by law-enforcement agencies.

“To pull something like this off, the group needs intelligence,” Kerik, who oversaw the city’s force during the 9/11 attacks, said in an interview. “They’ve got to do surveillance. They’ve got to acquire weapons.

“They have to train. They have to do mock runs of whatever it is they’re going to do,” he added. “You mean to tell me five guys pulled off these six attacks? Absolutely not.”

Kerik noted news reports that as many as 12 terrorists were involved in the assaults that involved multiple explosions and shootings at seven sites across Paris at restaurants, a soccer stadium and a concert hall.

“I personally believe it’s more,” Kerik told Newsmax. “But even if it’s a dozen, you mean a dozen guys or more planned this attack for several weeks, if not months, and nobody picked nothing up on it?

“What it demonstrates is how extremely important our intelligence capabilities are,” Kerik told Newsmax. “You only have to fail one time. These guys, they only

“Somewhere, there was no chatter? There was nothing? They didn’t know this was coming, in any way?” he asked. “It’s just bad. It’s really bad.”

Kerik, who warned of such an attack in the United States in a 2007 blog post on his website, said that political correctness regarding Muslims worldwide has led law-enforcement agencies becoming less aggressive in tracking possible terrorists.

“Everybody’s worried about insulting the Muslim community,” he said. “We’re not talking about law-abiding Muslims. This is a radical Islam extremist group that’s responsible for this.

“Nobody wants to go into the mosques anymore. Nobody wants to collect intelligence in the Muslim community. As soon as anybody even talks about it, they’re attacked. There’s this major outcry that there’s profiling.

“Somebody did this — and I’m confident that these guys were talking about it somewhere and it wasn’t picked up.

“Being politically correct in combating terrorism is only going to get us hurt,” Kerik told Newsmax. “This is an enemy that is a chameleon. This isn’t a conventional enemy. These people aren’t walking around clad in uniform.

“All that intelligence has to be collected.”