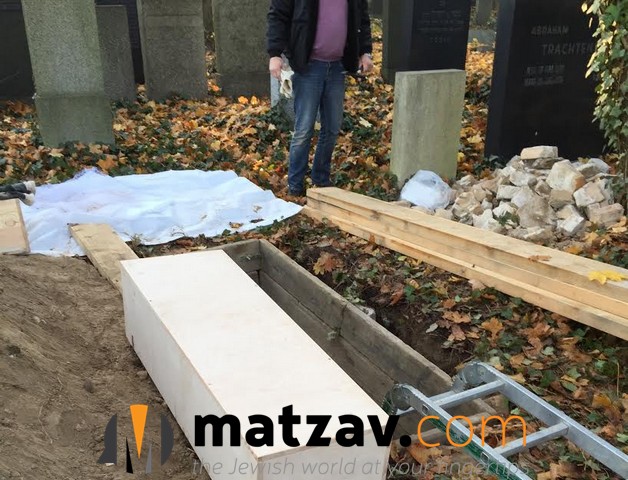 Rabbi Yehuda Teichtal, rabbi of the Berlin Jewish community, authorized the exceptional transfer of a grave from the local community cemetery in Berlin to the city of Chicago.

The grave is that of a woman who arrived with her family from Lithuania to Berlin in 1937 on their way to the United States. The woman did not make it to the end of the journey and died in Berlin at the age of 67. After her death, the family moved to the United States, where they eventually settled. Her grandchilren requested that she be re-buried alongside her husband in Chicago.

In an exceptional halachic ruling by Rabbi Teichtal, he states that according to halacha, relocating a grave, even for a more honorable location, is usually forbidden. Nevertheless, he said, in the case of reuniting family members, it is allowed by adjudicators in light of what is written in Shulchan Aruch: “It is the best of pleasantries for a man to be buried alongside his forefathers.”

“In our case, we have the grave of both a spouse and a family member. In light of that and after consultations with other rabbonim, I have come to the conclusion that in light of the fact that it is the will of the deceased’s family members to re-bury her in Chicago, alongside her husband and family, I will specifically allow it,” wrote Rabbi Teichtal.

The coffin was excavated last Wednesday from the burial ground at the Jewish community cemetery in Berlin, under the supervision of Rabbi Teichtal, and was flown to Chicago, where a second funeral for the woman took place, 78 years after her death.