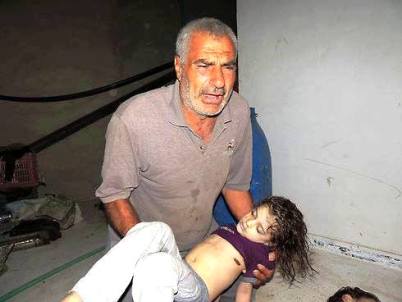 Minister Naftali Bennett, chairman of the Habayit Hayehudah party, today on Facebook compared the chemical weapons attack in Syria to the Holocaust.

“Jews of the world: Speak up. Do NOT remain silent! Seventy years ago when, children and babies were murdered, the world stayed silent,” wrote Bennett.

Bennett’s comments were accompanied by a picture of a crying man carrying what appeared to be a dead girl.

“Today, too,” wrote Bennett, “the world is silent to the terrible massacre in Syria. Television and Internet aren’t waking up the world. Piles of dead children cannot be ignored. A child is a child is a child. Anywhere.

“We will NOT be silent. The Jewish People, and I, as a minister in the government of the Jewish state, have a special duty to speak up, to yell, so the world will hear and stop ignoring what’s going on in Syria. That’s our moral duty. Please ACT and SHARE this NOW.”