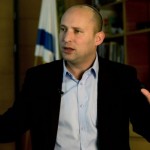 The Israeli authorities are “looking at” one or two rabbis who played a role in the radicalization of far-right Jewish extremists, Education Minister Naftali Bennett said. He stressed, however, that the hard core of the “hilltop youth,” from whose ranks the alleged Duma murderer sprang, “don’t have rabbis” now. “No rabbi is extreme enough for them.”

In an interview with The Times of Israel, Bennett also said his ministry has launched programs to try to rehabilitate the hundreds of “hilltop youth,” whom he described as troubled youngsters “hijacked” by a very radical ideology. “We have several programs where we literally send people out to the hills,” said Bennett, leader of the nationalist Jewish Home party.

Bennett said the hardcore of extremists “is in the single figures, the people around it are in the tens, and I would say the sympathizers” — dozens of whom were seen celebrating the Duma murders at December’s notorious “hate wedding” — “would be in the hundreds, but only hundreds. The more I learn about them, the more I see it’s troubled youth, that in other circumstances — if they were in the city or something — they might have done drugs or something like that. They were hijacked by this very radical ideology.”

Those who were involved, directly or indirectly, in July’s firebombing in Duma — in which baby Ali Dawabsha and his parents Riham and Saad were killed — must be prosecuted, which is what is happening, Bennett said. At the same time, he said, “we also have to act on the education side to get to these kids” who sympathize with the ideology. “We have to pull them out of the grip of these people and get them back into society.”

Bennett firmly rejected the notion that decades of Israeli rule over the Palestinians had contributed to a mindset in which Jewish extremists consider Palestinian lives to have less value. “These people (responsible for the murders), these terrorists,” he said, “they’re anarchists, essentially. That’s what anarchists do: They plant and create events that can create so much havoc and trouble for everyone. With a goal that’s not about Judaism, it’s about not accepting the Jewish state as it is… Their end is to dismantle Israel… Their very goal is to bring the world (down) upon us. It’s the antithesis of the religious Zionist ideology which sees the state as something almost sacred.”

Bennett said “one or two” rabbis “were a stage in the process of this radicalization,” though “these people don’t have rabbis” now. “They don’t have any leaders. No rabbi is extreme enough for them.” The Israeli authorities, he said, were “looking at” those one or two rabbis, but “they were not involved in any murder, so it’s a complicated situation… As (far as) we know right now, they no longer influence anyone. These kids are like a satellite that left orbit.”

Bennett, whose party is the ideological home of much of the settlement enterprise, hailed the “500,000 Israelis who live in Judea and Samaria,” the Biblical name for the West Bank, as “communities of life and of optimism and of doing good.” Neither Israel nor the settlers were the culprit here. “It’s a fringe group. We have to take care of it. It does not represent Israeli society,” he said.

He contrasted Israel’s overwhelming condemnation of the Duma killings, and the determined effort to catch those responsible, with what he said was widespread Palestinian support for hundreds of terrorist attacks on Israelis. Officials in the Palestinian Authority “celebrate” such killings, he said. “That’s a society that’s been corrupted.”

The minister, who proposes extending Israeli law to Area C of the West Bank — about 60% of the territory — and having “the Palestinians govern Areas A and B,” said Israel would nonetheless have to permanently maintain its overall control of the West Bank. “Anyone who suggests that Israel can somehow defend itself without retaining Judea and Samaria forever is out of his mind,” said Bennett. And that also required a permanent civilian presence, he stressed. “There’s a myth that you can keep a military in a piece of land when there’s no civilians. It’s a myth because within a very short time frame, the pressures to pull out are so big because you don’t see that you’re actually defending anyone. The reality is that the communities living in Judea and Samaria, they’re the lifeline there. They’re driving on the roads. They keep the light of life there. And if they pull out, ultimately, within months or a couple of years, soldiers pull out.”