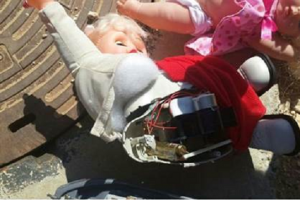 Ben Gurion Airport’s security thwarted an attempt to board arms and drugs onto a flight to Uzbekistan. The contraband was concealed inside a toys and a doll.

The suspect smuggler, a 36-year-old man from central Israel, attempted to flee but was apprehended a number of minutes afterward. According to him, he was given the baggage in which the drugs were found from an Uzbek national who claimed his luggage was overweight.