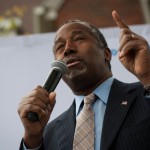 Ben Carson’s campaign is pushing for a major change in the structure of the remaining GOP debates. Barry Bennett, Carson’s campaign manager is meeting with other campaign representatives Sunday night to discuss the prospect of moving debates from television to the internet, with longer allotted times for candidates’ statements and fewer moderator questions, Gideon Resnick reports for the Daily Beast.

Resnick reports that Bennett also wants candidates to have a minimum of five minutes for opening and closing statements, which would be almost an hour of time alone with the lineup from the last CNBC debate.

The debates would be streamed on Facebook or YouTube, essentially acting as prolonged pitches for each candidate. There are eight remaining RNC debates scheduled and if nothing else, Carson’s campaign wants those numbers reduced. “They’re all bunched up and they really do take a lot of time away from the campaign and they take a lot of financial resources for us to be able to work on them,” said Carson’s spokesman, Doug Watts.

There are many different opinions from various candidates on ways to ameliorate what was deemed as a disastrous debate. Senator Ted Cruz wants more conservative moderators. Senator Lindsey Graham has suggested two debates with equal numbers of candidates randomly sorted into each. Carson’s ally in the previous battle to limit the CNBC debate to a two-hour run time could also have problems with imposing lengthy opening and closing statements.