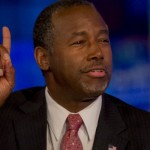 Unlike many of his conservative colleagues, Ben Carson would not eliminate the Department of Education if he were president. Instead, he would use the federal agency to police “extreme political bias” on college campuses, Andrew Kirell reports for the Daily Beast.

Appearing Wednesday morning on Glenn Beck’s radio show, Carson was asked whether he would dismantle the department as part of his education policy.

“I actually have something I would use the Department of Education to do,” the doctor smirked in response to the question.

“Would it be pack boxes for the State Department? The IRS?” Beck joked.

And then Carson’s serious recommendation: “It would be to monitor our institutions of higher education for extreme political bias and deny funding if it exists.”

So, in effect, “politically incorrect” Ben Carson would like a government agency to be arbiter of what is or is not politically “extreme” speech on campuses.