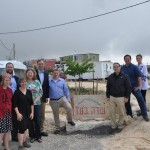 The Belgian government is moving to recommend that retailers separately label goods produced by Jewish communities in Judea and Samaria.

“It’s a non-binding advice to state on labels that products originating from occupied territories come from there,” a spokeswoman from the Belgian Economics Ministry said, Reuters reported. “We don’t see this as a sanction against Israel, but EU rules stipulate that consumers have to be informed of the origins of products.”

The move by the Belgian government comes as several countries and retailers throughout the European Union are seeking to either separately label goods from Judea and Samaria or ban them outright in order to pressure Israel towards a two-state solution. The British supermarket giant Tesco announced that starting in September it would suspend the sale of products from Judea and Samaria.