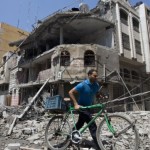 A Belgian doctor manning an emergency phone system refused to treat a 90-year-old Jewish woman who had suffered a rib fracture and was in need of urgent medical help, telling her to “go to Gaza” instead.

“I will not! Send her to Gaza for a few hours, then she will not feel pain anymore,” the doctor told the woman’s son, who had called the emergency hotline, the Belgian daily Joods Actueel reported.

According to the report, the doctor knew the patient was Jewish because of her name and her address in Antwerp, which has a large Jewish population, as well as the accent of her son.

When later confronted for his response by a family friend, the doctor said he was in a “fit of rage.” The woman’s grandson, Hershy Taffel, has filed a complaint of racism with police.

“This reminds me of what we underwent in Europe 70 years ago, I never thought that day would ever be repeated,” Taffel said his grandmother remarked after the phone call.

Along with the rest of Europe, Belgium has seen an increase in anti-Semitic incidents since the start of Operation Protective Edge.