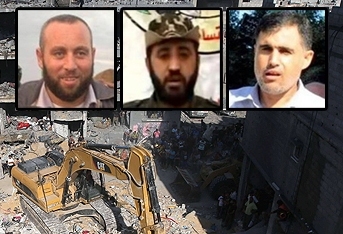 After two months of expectations, the Shin Bet’s special operations command and control center in Tel Aviv fell silent at 2:30 am on Thursday. Dozens of analysts, researchers, field coordinators, and operation officers waited for the climax of the targeted killing operation – likely the most successful such assassination since Ahmed Jabari in November 2012.

A few one-ton bombs were dropped by IAF F-16s through a window into a structure belonging to a Hamas activist on the outskirts of Rafah. The activist provided shelter for the number three and number four targets in Hamas’ general staff – Rafah Division commander Raed al-Attar and Southern Division commander Mohammed Abu Shmallah.

The two wanted men were convinced their protective measures, devotion to operational security, and reliance on a long chain of messengers would throw the Shin Bet off their trail.

N., the deputy chief of the Shin Bet, was in the command and control center in Tel Aviv keeping a close watch on the operation under the direction of the general security service’s leader, Yoram Cohen, when he gave the final green-light from an intelligence perspective for the IDF’s coordinated attacks from the air and land.

The final minutes before the targeted killing were nerve-wracking. The surveillance efforts on al-Attar and Abu Smallah had been underway for months, but the pair made a point of hiding within areas that the IDF would hesitate to attack for fear of harming innocent bystanders or because of insufficient intelligence.

This time, however, dozens of Shin Bet personnel participating in the operation arrived in the evening hours to discover the unexpected: two senior officials from Hamas’ armed wing were – to a high degree of certainty – staying in the same building.

The analysts at the command & control center received massive loads of real-time information, compiling on top of the large plasma screens the area of operations near Rafah.

The next stage of the operation involved representatives from the Shin Bet’s operating wing translating the information into a plan of attack – the armaments to be used, the amount of explosives needed, and the preferred angle of entry.

The proposed plan was passed on to representatives from Southern Command and the IAF and the wanted pair was eliminated, as authorized beforehand by Defense Minister Moshe Ya’alon.

But the operations was not over and within a few hours the Shin Bet received the long-awaited news – al-Attar and Shmallah, which had launched dozens of brutal terror attacks on Israel since the 90s, were killed in the attack. Rafah Division senior commander Mohammed Barhoum was also killed in the attack. Case closed.

The Shin Bet considered the attack on the pair and Barhoum not only as a punitive action, as they had recently planned large-scale attacks against IDF forces and held sensitive information on the planning and rehabilitation of the terror tunnel infrastructure.

Hamas’ leadership was surprised by the impressive success of the intelligence operation, especially given that the attack was not undertaken during the days of calm achieved by the negotiations and ceasefires, when senior members in the organization often leave their bunkers to change hiding spots – but during the worst day of hostilities since the beginning of Operation Protective Edge, with Hamas launching more than 170 rockets.

As opposed to previous operations, when warplanes were already aloft waiting for instructions, the jets were launched at short notice from their bases, receiving the precise location of the structure on the way. The IAF planes initiated the attack far away from Rafah – while flying over the sea – under the direct command of a senior commander in the air force.