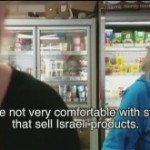 A group of self-appointed “inspectors” for the anti-Israel Boycott, Divestment and Sanctions (BDS) movement visited various German businesses on Saturday in a bid to ensure that the businesses are complying with the European Union’s new guidelines removing “Made in Israel” labels for Israeli products from Judea and Samaria, the Golan Heights, and eastern Jerusalem, the German newspaper TAZ reported.

The activists, dressed in white overalls, visited downtown shops such as fruit stands and department stores in the German city of Bremen to enforce the rule. One spokesperson for the BDS group, Claus Walischewski, said the inspectors would guess which products were actually imported from beyond Israel’s 1967 lines because it is generally difficult to recognize products imported from Israel.

According to TAZ, the BDS group marked products on the shelves with notes that read, “Caution: The product could come from an illegal Israeli settlement.”