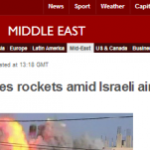 After a month of reporting a one-sided story focused on the “disproportionality”  of Israel’s response to Hamas rockets in Gaza, while ignoring both the illegal war tactics and twisted morality of Hamas, the BBC on Thursday assigned its head of statistics, Anthony Reuben, to provide a more measured analysis of the conflict.

In a piece headlined, ‘Caution needed with Gaza casualty figures,’ the BBC came around to the same conclusion that has been reported after each week of the conflict based on casualties data from Gaza that was published by Al Jazeera.

“Nonetheless, if the Israeli attacks have been ‘indiscriminate,’ as the UN Human Rights Council says, it is hard to work out why they have killed so many more civilian men than women,” Reuben wrote at BBC.com.

The BBC cited the same conclusion, also now reached by the New York Times, which it quoted as having reviewed the names of 1,431 casualties and found that “the population most likely to be militants, men ages 20 to 29, is also the most over-represented in the death toll. They are 9% of Gaza’s 1.7 million residents, but 34% of those killed whose ages were provided.”

“At the same time, women and children under 15, the least likely to be legitimate targets, were the most underrepresented, making up 71% of the population and 33% of the known-age casualties,” the NYT said.

Reuben also quoted IDF Spokesman Capt Eytan Buchman, who said that “the UN numbers being reported are, by and by large, based on the Gaza health ministry, a Hamas-run organisation.” Buchman said to keep in mind that “when militants are brought to hospitals, they are brought in civilian clothing, obscuring terrorist affiliations” and that “Hamas also has given local residents directives to obscure militant identities.”

BBC quoted Buchman as saying: “It’s important to bear in mind that in Operation Cast Lead [the last Israeli ground offensive in December 2008-January 2009], Hamas and Gaza-based organisations claimed that only 50 combatants were killed, admitting years later the number was between 600-700, a figure nearly identical to the figure claimed by the IDF.”

In the end, the BBC didn’t want to disavow the information provided by the UN agency, concluding: “But it does mean that some of the conclusions being drawn from them may be premature.”