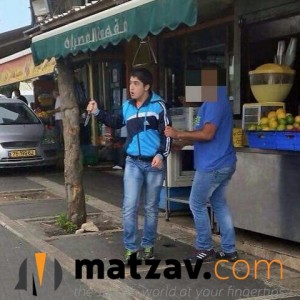 During the first three weeks of October 2015, ten Israelis were killed and 112 wounded — eleven of them seriously — in 40 stabbing attacks, four shootings, and five vehicular attacks that took place throughout the country.

On October 23, however, BBC News told its audiences that Israelis are suffering from either a collective psychosis “characterised by delusions of persecution” or “unjustified suspicion and mistrust of other people” — depending on which definition of the word “paranoia” BBC editors intended with their headline that read: “Paranoia deepens wedge between Israelis and Palestinians.”

Either way, it is obviously extremely hard to believe that if British citizens had been subjected to such a wave of terror attacks, the BBC would characterize their mood as unjustified or disconnected from reality by using the term “paranoia.” And it is, of course, equally unlikely that after more than 50 attacks on British citizens in three weeks, the BBC would still be avoiding the use of the word “terror” — as it continues to do in its current coverage of Israel.

In that article — which appeared in the features section of the BBC News website’s Middle East page — the BBC Jerusalem Bureau’s Kevin Connolly promotes the notion of equivalence between the distress of Israeli Jerusalemites with that of Palestinians who, according to his account, are inconvenienced by roadblocks and suspicious looks.

But at times of rising tensions and rising casualty figures like this, the two populations that normally lead parallel lives share something very profound in common.

They are united by their fears for the dangers their families might face and by the deep urge that’s within all of us to keep our children safe.

In the section of his report devoted to the neighbourhood of Issawiya, Connolly writes:

Even in better times there is deep resentment in Issawiyah at the practical outworking of the occupation – Palestinians in villages like this pay the same local taxes as Israelis in West Jerusalem but strongly feel they don’t receive the same services.

They point to the condition of the roads and pavements and the absence of recreational facilities.

“There are Jewish districts where they have parks for their dogs,” one man told me, “And here we don’t even have a park for our kids.”

He, of course, refrains from informing readers that residents of Issawiya were at the forefront of opposition to the creation of a national park on their doorstep.

Although he describes the inconvenience of roadblocks implemented to try to deal with terrorism, Connolly does not provide audiences with relevant context, failing to clarify that a very significant proportion of the perpetrators of attacks came from Arab neighborhoods in Jerusalem.

There is an Israeli checkpoint at the main entrance to the village. The local people say that if anyone throws stones at the soldiers who man it, they close the road and force commuters returning from Jerusalem to wait in their cars for anything up to an hour.

Fear for the safety of children does unite the two communities, although the fears are different.

Israelis worry their children might be the victims of a politically-motivated street attack – Palestinians fear the readiness with which Israeli police and soldiers resort to lethal force, especially if they live in a part of the West Bank where it is easy to get caught up in street protests. [emphasis added]

Those “street protests” are more accurately described as organized violent rioting, and Connolly’s apparent belief that Palestinian parents lack the agency required to prevent their offspring from participating in such activities is quite remarkable.

Connolly closes his article with promotion of a dominant — yet inaccurate — theme seen in much BBC coverage in recent weeks.

…the fears and anxieties triggered in this latest round of violence here are individual and deeply personal just as the attacks appear to have been spontaneous. […]

But the random nature of the violence and its lack of an apparent link to any known organisation is going to make any kind of diplomatic or political intervention here even harder than usual.

Yet again the BBC conceals the incitement from assorted Palestinian factions, which has fueled this wave of terrorism — and the known links of some of the perpetrators to terrorist groups — from audience view.

In addition to his written report, Kevin Connolly also produced a similar audio report that was broadcast onBBC Radio 4’s “Today” program on October 24. The item (available here from 01:49:43) opens with the following introduction from host James Naughtie.

As if he didn’t have enough on his plate, the American Secretary of State John Kerry has begun a round of diplomacy trying to reduce tension in Israel and the occupied Palestinian territories where an upsurge of violence has left about 60 people dead in the last few weeks. Most of the dead are Palestinians. Some have died in the familiar violent clashes with the Israeli security forces in the West Bank but some of the deaths have occurred when individual Palestinians not known to be members of militant groups have made stabbing attacks on Israelis and then been shot by the police or the army. It’s a new kind of attack and its left people in both communities anxious and frightened.

Could audiences determine from that introduction that one-sixth of those casualties are Israelis murdered in terror attacks? Would they understand that those killed whilst engaged in violent rioting include some 17 people from the Gaza Strip and that the border fence there has been breached by such rioters on several occasions? Would they also comprehend that Naughtie’s portrayal of “some” Palestinians shot whilst carrying out terror attacks (and not only stabbings, as he inaccurately states) actually means that they number around half of the Palestinian fatalities and that a similar number of terrorists have been caught alive?

One doubts very much that Radio 4 listeners went away with an accurate perception of events from that introduction — and in addition, they were certainly misled by the inaccurate claim that such terror attacks are “a new kind.” Moreover, with the BBC having failed to provide its audiences with an accurate picture of Palestinian terrorism during the nine months preceding October 2015, listeners would have no way of knowing that Naughtie’s claim is inaccurate.

As in his written article, in that audio report Kevin Connolly promotes the notion of equivalence between victims of terror and their attackers, fails to provide context when describing the inconvenience caused by roadblocks, and erases the all-important issue of incitement by portraying the attacks as “random and spontaneous.”

We think of Jerusalem as a place of division – and so it is – but in times of rising tension and rising casualty figures, there is something that unites its two peoples: the grinding daily fear about how you keep your family safe.

On the way into the outlying Palestinian village of Issawiyeh there’s an Israeli checkpoint – an irritation for local people arriving home from their daily work in Israeli West Jerusalem.

The U.S. Secretary of State John Kerry is working on all of this now, trying to calm fears. But what can politicians do when attacks are random and spontaneous and fears so personal and so deeply felt?

Kevin Connolly apparently believes the narrative of equivalence he promotes in these two reports. He is obviously comfortable with promoting the idea that a pensioner murdered in a shooting attack on a city bus, a 59 year-old deliberately run over and then hacked to death with a meat cleaver, and a young father stabbed to death whilst walking with his family are just the same as the people who decided to carry out those attacks and were shot by security forces rushing to the scene.

He is also clearly at ease with promoting the myth that attacks on Jews for no other reason than the fact that they are Jews which are praised and glorified by Hamas and PA officials alike are “spontaneous” and “random”. And, as we see in these two reports, he has no qualms about promoting the narrative that the emotions of people who are experiencing “not a very nice feeling” and traffic inconveniences are the same as those of people who fear that they may be targeted by a terrorist simply because of who they are after seeing over 50 such terror attacks in a matter of a few weeks.

Whilst Connolly’s adopted narrative may serve to provide space-filling material for assorted BBC platforms and advance a political agenda, it certainly does nothing to contribute to meeting the BBC’s obligation to enhance audience understanding of this particular “international issue.”