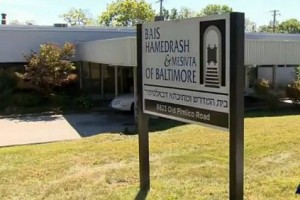 An unidentified man, possibly of Middle Eastern descent, shot at frum Yidden with a BB gun and blasted a hole in a window in the Baltimore area late Thursday afternoon, the first day of Rosh Hashanah.

No one was injured, but residents of the area are worried. “It says something about what is going on in the world in terms of the anti-Semitism that is growing,” Bernice Seiden told Baltimore’s WJZ television.

The incident occurred along Old Pimlico Road, about 9 miles northwest of downtown Baltimore.

The man drove by Bais Hamedrash and Mesivta of Baltimore, Rav Zvi Dov Slanger’s yeshiva, while a number of Yidden were walking and yelled, “Jews, Jews, Jews” as he fired with what appeared to be was a BB gun. The pellets missed the targets, some of whom were children, and hit a window of the yeshiva.

The suspect was described as a white male but with a dark complexion, possibly of Middle Eastern descent.