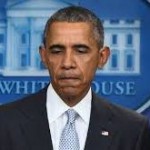 “This is an attack on all of humanity and the universal values we share,” Obama said in a statement delivered in the White House Briefing Room. “We stand prepared and ready to provide whatever assistance the people of France need to respond.”

Obama added, “This is a heartbreaking situation, and obviously those of us here in the United States know what it’s like and we’ve gone through these kinds of episodes ourselves.”

Obama declined to speculate on who was responsible for the attacks. Late Friday night, the White House announced Obama spoke with French President Francois Hollande, offering his condolences and reaffirming U.S. support in the investigation.

Vice President Joe Biden offered his “deepest condolences to all those wounded and to the families who lost loved ones in today’s terrorist attacks in Paris.”

“We are bound by timeless democratic values that the cowardice and perverse ideologues of extremist networks can never match, wherever they are. Such savagery can never threaten who we are. We will respond. We will overcome. We will endure,” he said in a statement.

Secretary of State John Kerry said the U.S. Embassy in Paris is “making every effort to account for the welfare of American citizens in the city, and in the days ahead we stand ready to provide whatever support the French government may require.”