King Abdullah, who is putting Obama up at his lavish desert horse farm, showered Obama with compliments as he handed him jewellery, which he said carries special meaning. It is understood to be an award called the King Abdul Aziz Order of Merit, the country’s highest honor.
“Those are only given to the very few friends of the king, and you are certainly one of those,” Abdullah said as he presented the thick chain and large medallion to Obama in an ornate meeting room with marble columns, engraved mirrors and a large chandelier. Obama replied: “I consider the king’s friendship a great blessing, and I am very appreciative that he would bestow this honor on me during this visit.”

Then, as an aide approached him with the necklace, Obama exclaimed: “Goodness gracious. That’s something there.”

The king draped it around Obama’s neck, and the taller Obama bent his head low to accept it.

It was a risky move as, when the two leaders saw each other back at the G-20 summit in London, critics accused Obama of bowing to the Saudi monarch during a photo-op.

The White House maintained he was merely bending to shake hands with a shorter man.

This time, when they greeted each other at Riyadh’s main airport, there was a light embrace and the region’s traditional double kiss.

Obama descended his plane to find a tarmac filled with people, including the Saudi national guard and about 150 other military members.

Standing under a gazebo, the two leaders listened to each country’s national anthem, reviewed the troops and greeted Saudi dignitaries. 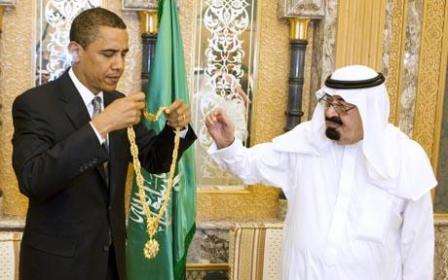 A 21-gun salute was fired from a distance. At the airport’s flower-adorned VIP terminal, Obama and Abdullah then sat together in gilded chairs, sipped cardamom-flavoured Arabic coffee from small cups and chatted briefly in public before retreating to hold private talks on a range of issues at the king’s ranch outside of Riyadh.

As they arrived at the sprawling grounds, where the king keeps some 260 Arabian horses, guards on horseback flanked the long driveway, carrying swords and flags of the two countries.

Inside, Abdullah introduced Obama to several princes in an enormous room decorated to look like a tent, with a billowing draped ceiling, large candelabras, and a towering picture of King Abdul Aziz, founder of the modern Saudi monarchy.

Looking up, Obama joked: “This is a much nicer tent than you gave to Prince Charles.”

That drew a laugh from Abdullah, who then explained that Saudi royals try to maintain ties to their desert roots even inside buildings.

The two also heaped praise on each other.

“I’ve been struck by his wisdom and his graciousness,” Obama said of the king and thanked him for his “extraordinary generosity and hospitality.”

Abdullah, in turn, expressed his “best wishes to the friendly American people who are represented by a distinguished man who deserves to be in this position.”

As for that necklace, Obama took it off after a few minutes – and a few photographs – for “safekeeping.”