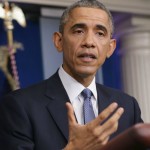 Today, Sunday, January 11, leaders of important American allies are gathering in Paris to attend a public unity rally in the wake of the terrorist attacks in France. French President Francois Hollande will be joined by 30 world leaders, including British Prime Minister David Cameron and German Chancellor Angela Merkel, in what has been called “one of the most significant public occasions in the history of post-war France.” Notably absent? The President of the United States. (In response to a query, the White House press office confirmed to me that the President is not traveling to France.)

Everyone recognizes the attack on the French satirical newspaper Charlie Hebdo, killing 12 people, was not just an attack on a particular magazine. It was an attack on the idea that in a free society people have the right to say and write things that are provocative. There is no need to protect the freedom of speech to discuss the weather.

In On Liberty, John Stuart Mill wrote, “If all mankind minus one, were of one opinion, and only one person were of the contrary opinion, mankind would be no more justified in silencing that one person, than he, if he had the power, would be justified in silencing mankind.”
By not attending the unity rally in Paris on Sunday, President Obama has missed an opportunity to show leadership, to demonstrate that Americans are as committed to fight against terrorism as anyone in the world. And that America stands with its allies in a worldwide battle that, unfortunately, is likely to last many years.

In a statement, President Obama said, “And I think it’s important for us to understand, France is our oldest ally. I want the people of France to know that the United States stands with you today, stands with you tomorrow.” But he won’t be standing with them on Sunday.

This article first appeared in FORBES.