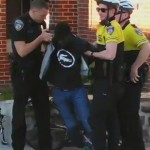 A Baltimore police officer has received a new trial date after a judge last week declared a hung jury in the case of the first cop charged in the death of Freddie Gray.

Jurors informed a judge last week that they couldn’t reach a decision in the case of Porter, who has been charged with involuntary manslaughter, leading to the judge declaring a mistrial.

Porter, Goodson and four other officers were charged in the death of Gray.

Gray, a 25-year-old African-American man, suffered a fatal injury while being transported by police in April, sparking protests and rioting in Baltimore.