A large rally is scheduled to take place today at 12pm in Baltimore “L’maan K’dushas Shabbos” against the planned opening of the Owing Mills JCC in Baltimore, MD. Over 4000 people are expected to attend. All local mosdos and yeshivos are giving off so everyone can attend the rally. There will be busses from Yeshivas Ner Yisroel to the rally. Rabbi Frand and others will be speaking at the rally. The rally is being organized by the Vaad Harobonim of Baltimore and Vaad Harobonim of Greater Washington in the yard of North Western High School on the corner of Park Heights and Falstaff Road.

Twelve years ago, a similar proposal was passed by the JCC to open its Owings Mills campus on Shabbos. That proposal, however, was voted down by the Associated board. Before the vote, a similar rally attracted some 3,500 people.

The JCC executive board has voted to open the suburban Owings Mills campus on Shabbos from 1 to 6 p.m.

The community is home to two JCC campuses. The Park Heights Avenue building, in the middle of an Orthodox neighborhood in Baltimore City, has special programming such as separate swimming and workout areas, and was not considered for Shabbos hours. 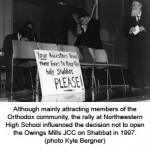 The suburban campus, however, is a different story. In attempt to draw semi-observant Jews the planned opening of the facilities on Shabbos comes with conditions: There will be no financial transactions, including the sale of food or membership signups; no organized classes; and no staff forced to work. In addition, area congregations are being told they can hold programs for free such as Shalosh Seudos and Havdalah.

Area non-Orthodox rabbis said they are satisfied with the conditions.

However, the Roshei Yeshiva, Rabbonim, and leading kehillah members are strongly against the proposed opening.

The vote will take place May 28.

“This is going to be a very positive program for the support of Sabbos observance,” said Eli Schlossberg, one of the rally’s organizers. “Just like the last one we had, we’re not coming out against anything or anybody.”

The proposal and subsequent vote applies only to the Owings Mills JCC. The Park Heights JCC, located in the heart of the Orthodox community, is and will continue to be closed on Shabbos.