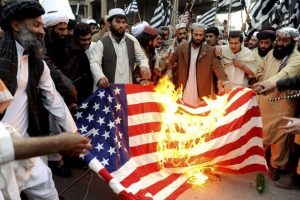 Anyone who hoped that Iran’s nuclear agreement with the U.S. portended a new era of openness with the West has been jolted with a series of increasingly rude awakenings over the past few weeks.

In addition to arrests of American citizens in Iran, Ayatollah Ali Khamenei, the supreme leader, said the “Death to America” slogan is eternal. New anti-American billboards in Tehran include a mockery of the Iwo Jima flag-raising photograph. And an Iranian knockoff of the American Kentucky Fried Chicken chain was summarily closed after two days.

A backlash against the U.S. appears to be underway. State-sanctioned media have been producing a litany of American conspiracy theories including the possibility that the CIA was responsible for downing a Russian jetliner in Sinai, and that a “network of American and British spies” has been rounded up.

The head of the Revolutionary Guards, Maj. Gen. Mohammad Ali Jafari, warned on Sunday that a new sedition was underway involving the U.S. and its “domestic allies.”

Chanting “Death to America” and burning the U.S. flag, Iranian protesters Wednesday marked the anniversary of the 1979 storming of the U.S. embassy in Tehran with a show of anti-Washington fervor despite the nuclear deal. Demonstrators held placards with slogans including “Down with USA” and “Down with Israel.” Prosecutor General Ebrahim Raisi gave a fiery speech attacking U.S. “atrocities” ranging from slavery and the treatment of Native Americans to phone tapping and “the killing of 300,000 Iraqis.”