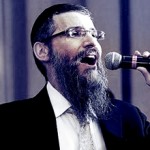 The revelation that a new song belonging to noted singer Avraham Fried was stolen and distributed without his permission has sent shockwaves throughout the Jewish music world.

“This is somewhat unprecedented in our world,” a music insider told Matzav.com. “It’s unfortunate, and hopefully by reporting on this, it will prevent such an occurrence in the future.”

The song in question, titled Ribon Ha’olamim, was apparently stolen from the actual studio where Mr. Fried was recording it. It was subsequently sent to others online and via WhatsApp.

In response to the theft, Mr. Fried released a brief statement.

Fried, whose full name is Avraham Shabsi Hakohen Friedman, is one of the most successful and sought-after singers in the frum world. The 56-year-old performer began his career with the release of his first album No Jew Will Be Left Behind in 1981.

The youngest of eight children and father of eight, Fried resides in Crown Heights, Brooklyn. He has released over 30 best-selling albums.