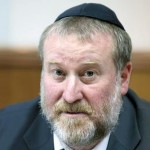 The former chief IDF prosecutor was the only candidate to receive the required four votes from the appointments committee.

Mandelblit, a general in the IDF reserves who served as chief IDF prosecutor, was considered the preferred candidate of Prime Minister Benjamin Netanyahu, but his candidacy ran into difficulties concerning his role in the Harpaz affair and the opposition to his appointment by current Attorney General Yehuda Weinstein.

Approval by the committee headed by Chief Justice of the Supreme Court (ret.) Asher Grunis, however, is probably paving Mandelblit’s way to the coveted position.