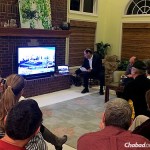 Avi Frenkel of Israel spoke softly, his voice, at times, searching—as if for the right word in English or perhaps just for a momentary break—while he answered question after question about his life, his son and how people should respond when they hear about terror attacks in Israel.

“I think every decent person in the world, when they hear of such things happening, they should react the way they feel. If one feels he should pray, he should pray. If one thinks it demands he be a better person—a better husband or wife or man or woman—then that’s what he should do.”

Frenkel visited Chabad at the University of Illinois and Champaign-Urbana, more commonly known as Illini Chabad, this past weekend to talk to students about staying positive when confronted with serious challenges, even tragedy.

It’s a topic that has become all too familiar to Frenkel and his wife, Rachel. Their 16-year-old son Naftali and two of his friends, Gilad Shaar and Eyal Yifrach, were kidnapped and killed last year by the Hamas terror group.

“My son was a normal boy, and people are relating to him as a tzaddik [righteous man] who did this and that, but I’m not getting into calculations for G-d of who is a tzaddik,” said Frenkel. “I saw him as a father would, and we had a lot of good things that we can learn from him, but that’s on a private level as a family.

“As a nation, as Jews all over the world, we should remember the solidarity we felt then, and to remember that it’s real and that’s something we share, and we should use it when we need it.”

More than 200 people came out over the weekend to hear Frenkel speak as part of an Israel Solidarity Shabbat sponsored by Illini Chabad, which is co-directed by Rabbi Dovid and Goldie Tiechtel. Among those in the audience was 18-year-old Zach Roth of Bedford, N.Y., who found Frenkel’s talk honest, real and uplifting.

“It was one of the most interesting and inspiring speeches I have ever heard it my life,” said the student. “I was beyond impressed in the manner in which he handled himself, delivering a tough story to people he never met before. The part of the speech that I found most inspiring was when he took questions. I feel this was because he made it very clear that all questions were OK to ask, no matter how hard they may be for him to answer.”

Coming to the college campus was a bittersweet homecoming of sorts for Frenkel, who lived in the area for one year when his father took a sabbatical from his job in Israel to serve as a professor there.

As he said during his talks to the students: “I’m trying to stay positive in front of hard times, and we can feel sorrow without becoming sorrow.”

He continued, saying that “there are different ways of how to deal with grief or mourning, and each is legitimate. Each person must do what’s good for him and what works for him. For my wife and me, we try and look forward and not stay in the past. We think that if you are too much in the past, you don’t live, and you can’t go on and do new things.

“You get stuck behind,” said Frenkel, “so we try to focus on things we can do—good things that we can do from what has happened. Like raise a healthy family. Thank G-d, we have six more children, and that’s a lot of work to do. That’s our way of dealing with it.”

He went on to say that one of the things the family most appreciated was the way all Jews seemed to come together and embrace Naftali and his friends: “We try and remind people of the unity of those days.”

Frenkel’s talk came at a particularly sad moment for those affiliated with the university. One of their own—20-year-old student Brett Lerner—was killed last month in a car accident.

“Brett was extremely passionate about Jewish life and an unbelievable sportscaster,” said Rabbi Tiechtel. “He affected so many people. He was not a very loud person, but very impactful person.”

The weekend, added the rabbi, was also the first yahrtzeit of the passing of Rabbi Isaac Neuman, a local Holocaust survivor who lost his entire family in World War II, save for a brother. “Rabbi Neuman became a rabbi, a teacher, and I always called him the messenger of hope,” said Tiechtel. “So we dedicated this program to both their memories.”