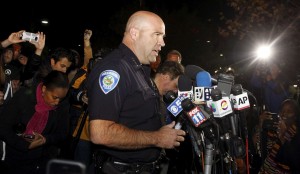 Dressed in black masks and tactical gear, armed with long guns and pistols, they entered a holiday party for county health workers in San Bernardino as it was in full swing. Before they fled, they had killed 14 people and wounded 17 others.

Four hours later, as fearful residents were ordered to stay home and scores of officers swarmed the streets, authorities chased a black SUV carrying two suspects from a home in the nearby city of Redlands. As TV news stations broadcast live overhead, the chase spilled back onto San Bernardino’s streets, where authorities and the suspects traded gunfire.

When it was over, a man and woman connected to the assault were dead. One body lay in the street, blood pooling. Another was recovered from the vehicle. A police officer also was wounded in the firefight but is expected to survive.

Late Wednesday night, San Bernardino police Chief Jarrod Burguan identified the people killed in the gun battle with police as Syed Rizwan Farook, a 28-year-old American citizen, and 27-year-old Tashfeen Malik. Police did not know where Malik was born or where she had lived.

Burguan said police are “reasonably confident” that Farook and Malik, who may have been married or engaged, were the same two people who opened fire at the holiday party Wednesday morning.

Farook, who had worked for the county health department for five years, left the party “under some circumstances that were described as angry.”

While federal sources have told The Times that Farook left the party after an altercation, investigaors said Wednesday night that the motive for the mass shooting was unclear.

“Is this a terrorist incident? We do not know,” said David Bowdich, assistant director of the FBI’s Los Angeles field office. He later said terrorism had not been ruled out as a motive.

Public records show Farook was employed by the San Bernardino County Health Department as an environmental health specialist, but it was not clear if that was the same person involved in the shooting. The party was a gathering of employees of the health department.

Farhan Khan, who was identified as Farook’s brother-in-law, struggled to explain the tragic shooting during a news conference held by the Council on Islamic Relations in Anhaeim late Wednesday night.

A third person was detained in the area where the pursuit ended, but authorities said they had not connected that person to the shooting. They raised the possibility that there could be at least one other person involved in the shooting and additional people involved in the planning.

A federal law enforcement source told The Times that the suspects hurled what were believed to be pipe bombs at police during the vehicle pursuit. San Bernardino police Chief Jarrod Burguan said police recovered one device, but it turned out not to be an explosive.

Burguan said police also discovered a device at the scene of the shooting that might have been an explosive, and authorities were working late into the night to dispose of it. Several items of concern were also located inside the SUV involved in the pursuit, and investigators were trying to determine if any of those items were explosive.

On Wednesday evening, police entered the Redlands home where the pursuit of the suspects had begun hours earlier, conducting a search.

Co-workers described Farook as quiet and polite, and said he had no obvious grudges with anyone in the office. The 28-year-old had recently traveled to Saudi Arabia and returned with a woman he met online.

The couple had a baby and appeared to be “living the American dream,” said Patrick Baccari, a fellow food inspector who shared a cubicle with Farook.

Baccari and Christian Nwadike said Farook, who worked with them for about three years, rarely started a conversation. But the tall, thin, young man with a full beard was well-liked and spent much of his time out in the field.

The shooting Wednesday was a grim marker: It was the deadliest mass shooting since the massacre of 20 children and six teachers at Sandy Hook Elementary School in 2012.

People at the party described a terrifying scene.

“Everyone dropped to the floor,” Denise Peraza, 27, told her relatives. “The guys opened fired for 30 seconds, randomly, then paused to reload and began firing again.”

Peraza was hiding under a desk when she was struck in the lower back. After the attackers left, the scene was silent for about five minutes. Then the doors swung open again, and a swarm of police officers entered the room.

The first 911 call came at 11 a.m. Police responded to the scene within four minutes, Burquan said.

As it has in others of America’s seemingly never-ending string of mass shootings, word spread via social media. The first sign that something horrifying was underway came when the San Bernardino County Fire Department reported via Twitter that the agency was responding to the scene of a “20 victim shooting.”

The attack at the Inland Regional Center, which serves developmentally disabled people, rippled across San Bernardino. All county schools, as well as city government buildings and courthouses, were on lockdown as police continued to search for the assailants. School officials, however, stressed that students had not been in danger and were dismissed on the regular schedule.

During a news briefing, Burguan said information about the party being the focus of the attack was “preliminary” and he declined to comment on a motive for the shooting. He did confirm that one person at the party left before the shooting, after an argument, but said it wasn’t clear whether that person was one of the eventual shooters.

“We have no information at this point to indicate that this is terrorist related, in the traditional sense that people may be thinking,” Burguan said. “Obviously, at a minimum, we have a domestic terrorist-type situation that occurred here.”

Hundreds of people were on the grounds at the time of the attack, Burguan said. Inland Regional Center officials said the conference room where the party was taking place can hold up to 200 people.

Chaos followed the gunfire. At first, some at the scene mistook the shots and law enforcement response for a routine disaster drill.

Dorothy Vong, a nurse who was working in a nearby building, captured the tension in a video.

As law enforcement officials sprinted toward the scene, someone can be heard saying, “Oh, that is scary.”

“They’re all geared up!” someone else says. “Rifles and everything!”

In the background, someone laughs. Then the reality sets in.

Carlos Ortiz’s son Kevin Ortiz was shot twice in the leg and once in the shoulder.

Carlos Ortiz, 54, was among a dozen people holding hands in a prayer circle outside Arrowhead Regional Medical Center, where numerous victims were taken.

“Kevin called me immediately after he got shot and said ‘I’ve been shot three times, Dad. I’m in pain. Don’t worry. There’s a policeman with me.’”

Kathy Hotetz, 37, waited anxiously outside the same hospital for word of her sister Denise Peraza’s condition. “She’s alive,” Hotetz said. “That’s all I know. Not knowing any more than that is the scariest part.”

A short time later, Peraza called her sister from her hospital bed, and gave her grueling account of the attack.

Closer to the scene of the shooting, dozens of people spent hours hiding in their workplaces.

Fred Henning was holed up inside the paralegal’s office where he works with his wife, about a block from the scene of the shooting. Henning said they were standing outside as helicopters swooped overhead.

“We just came inside because it could be stray bullets, who knows?” Henning said.

The block where the shooting took place is home to a number of businesses, Henning said, including a three-building complex that houses his office and about 140 others.

Lynn Spicer, an employee at West Tech/Webcop Interactive Systems, inside a nearby office building, said police were not allowing anyone to leave the area.

“I just heard sirens all day, and I went out and I saw nothing but massive cops were out,” Spicer said.

Spicer said more than 100 people were brought over from the Inland Regional building and gathered in her office complex’s parking lot.

President Obama was briefed on the shooting by his Homeland Security advisor, Lisa Monaco, and asked to be updated as the situation developed.

The president was being interviewed by CBS on Wednesday morning when news of the attack broke, and said the repeated occurrence of mass shootings shows the need for stricter gun laws in the U.S.

“Obviously, our hearts go out to the victims and the families,” he said. “The one thing we do know is that we have a pattern now of mass shootings in this country that has no parallel anywhere else in the world.”

The San Bernardino City Council held an emergency meeting Wednesday night to discuss the shooting. After the closed door session, several elected officials called on the city’s residents to rally together in the wake of the attack.

“I think there’s heavy hearts in the city because my heart is heavy. And I think as they day has worn on my heart has gotten heavier and heavier. So, what’s going to happen as this unfolds? We’re going to survive,” said Assemblywoman Cheryl Brown (D-Rialto), whose district includes the city. “This is San Bernardino. San Bernardino is a great city, regardless of what anybody else thinks or says, this is a great city.”

As night fell, some were still left to wonder whether their loved ones had been wounded, or even killed, in the morning attack. In East Hollywood, Mindy Velasco paced around her office, repeatedly calling area hospitals, trying to find her niece, who worked for the county health department.

Yvette Velasco, who is in her late 20s, had told her family that she planned to attend the holiday banquet.

“I’m fearing the worst,” her aunt said, her voice breaking. “Her sister asked me to pray because we know she was there.”

As Mindy Velasco worked the phones, Yvette Velasco’s father visited local police stations and evacuation centers in search of information, but to no avail.

“Yvette is usually in constant touch with us. She would definitely be in contact after something like this,” she said. “But, as of now, there is nothing.”