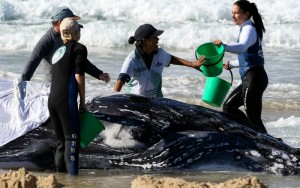 Western Australia’s Department of Parks and Wildlife has developed an implosion technique to euthanize beached whales.

A wildlife officer said it’s the only state in Australia that’s using explosions, and “there is no quicker result than that method.”

The bombs are detonated near the animals’ brains, he said. In 27 years, 146 humpback whales have been reported stranded on Australia’s west coast.

Only 50 of those were found on the beach alive, and an additional 26 died soon after. A little more than a dozen had to be put down by wildlife officials.

“The skull on a whale is quite thick and it’s virtually impossible to shoot it with a high-powered rifle,” explained explosives expert Ian Styles. “So we have to use explosives.” Read more at ABC.