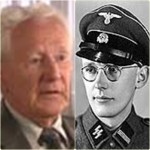 A 93-year-old man has been charged with 300,000 counts of accessory to murder for serving as a guard at Auschwitz.

Oskar Groening has openly talked about his two-and-a-half years as a guard at the Nazi death camp but says that while he witnessed atrocities, he didn’t commit any himself. But Hanover prosecutors claimed today he was a cog in the machine, noting he helped to collect money stolen from murdered inmates.

In his job dealing with the belongings stolen from camp victims, prosecutors said among other things he was charged with helping collect and tally money that was found.

“He helped the Nazi regime benefit economically, and supported the systematic killings,” state prosecutors in the city of Hanover said in a statement.

Read more at THE INDEPENDENT.