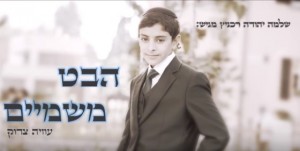 A few weeks after Shlomo Yehuda Rechnitz wrote “El Hanaar Hazeh” in memory of his sister-in-law, who passed away several weeks before the bar mitzvah of her bechor, a friend of his sent him a video of a relatively unknown child soloist named Uziah Tzadok singing “Ima,” a song that also relates to one’s mother who passed away.

Unfortunately for the Ashkenazi olam, his repertoire of songs only included Yemenite and Sefardic niggunim, without a very big captive audience.

In that vain, Shlomo Yehuda had him learn 13 or 14 slow classic Ashkenazi niggunim. They recorded 10 to create an album named מטעם גן עדן, which will be released within the next few weeks.

Below is one of the songs, Habeit, composed by the one and only Abie Rotenberg.