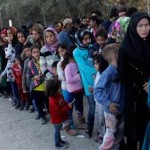 In recent weeks there have been ongoing debates between presidential candidates about immigration and the European refugee crisis. At the heart of these questions is how much are countries obligated to compromise their own security and economic system to help the less fortunate? In this article we will explore a pertinent rabbinic discussion from the Middle Ages called chezkas yishuv.

‘Chezkas Yishuv’ – The Right to Inhabit a City

During the middle ages many Jewish people could only live in designated areas of the city. Often Jews from other cities, looking for economic opportunity, would seek to move to other cities. However, the Jews of that city feared that the newcomers would deplete their sources of livelihood. Furthermore, the space in the ghetto was often cramped and insufficient for the original inhabitants’ natural growth. Accepting newcomers could come at a real expense to the existing Jewish population. Do the existing inhabitants have the right to stop the newcomers from joining their community? This question was called chezkas yishuv, meaning the right to inhabit a city.

The Views of the Rosh & Maharik

The Maharik (See Rema CM 156) wrote that other Rishonim disagreed with the Rosh. They maintained that inhabitants of a city do have a chazaka on their town. This gives them a right to prevent others from moving there, especially if it will hurt their livelihood. According to this approach, the right to live in a city does belong to its inhabitants. As such, newcomers need the permission of the original inhabitants to move in.

Rabbeinu Tam writes that there was a cherem (excommunication) instituted in some communities against unwanted newcomers. The idea of thecherem was to circumvent the halachic question of chezkas yishuv. Even if the townspeople could not stop the newcomers from moving in, they could make a cherem on them to protect their source of livelihood. This means that the community members would prohibit anyone from doing business with the newcomers.

While this practice seems harsh, it must be understood in the proper perspective. The economic conditions for many European Jewish communities were unbearable. The newcomers would literally be taking bread out of the mouths of the existing population. Indeed, Rebbeinu Tam wrote (SeeDarchei Moshe CM 156:9) that he never used the cherem. He explained that it was only instituted against unscrupulous individuals who did not want to help with the taxes. However, when this is not the case, one who improperly uses the cherem ‘is acting like Sedom and will not merit to be within the company of the righteous in the next world’. Similarly, the Rema also writes that the primary justification for stopping newcomers was because an overflowing Jewish population could anger the anti-Semitic governments and cause the Jews to be expelled.

Communities also sought to protect their interests from newcomers by another indirect tactic. Newcomers needed permission from the local authorities to move in. The townspeople would convince the authorities not to give the newcomers a permit. The Maharik ruled that this is permissible (cited inRema and Darchei Moshe ibid). He explained that since there was serious concern about the negative impact of newcomers, it is permissible to indirectly prevent them from moving in. The Maharik viewed causing the authorities not to issue a permit as only preventing the newcomers from getting a benefit, not as taking away something they already had. The Mabit (See Pischei Teshuva CM 156), however, disagreed. He maintained that even indirectly causing the newcomers to lose a legitimate right is not permissible.

We can glean from these discussions some important insights about some of the current issues. Does a country belong exclusively to its citizens? Possibly not. Should illegal immigrants be deported? Should a country refuse to take in refugees if they pose a security threat? These question could depend on how significant these risks are. If there is a real concern that the illegal immigrants are causing financial hardship to citizens or if the security risks are significant, one could consider them to be a rodef, a pursuer. Furthermore, there may be a difference between deporting individuals already in the country and not letting newcomers in. Otherwise, if they are willing to pay their fair share in taxes, we should welcome them and not behave like the selfish people of Sedom.