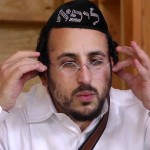 [Audio below.] This past week, singer Lipa Schmelczer appeared on Menachem Toker’s radio show in Israel, when a caller, named Malkie, asked Lipa about some of his music that she feels is not suitable to be sung by a “Chassidishe yungerman.”

Lipa responded by asking Malkie if she is familiar with the song “Golus, Golus,” sung by the Kaliver Rebbe, which Lipa explained originated from a non-Jewish song that was adapted by the Rebbe. “The song was sung about a woman,” said Lipa, “and the Kaliver Rebbe said, ‘I want to sing it about the Aibishter.’”

Lipa added that this has been done throughout the years, and that many of the zemiros Shabbos come from non-Jewish songs.

Malkie remarked that the Rebbe knew what a heiliger niggun is and was thus capable of adapting a song in that fashion.

Referring to the caller as “Rebbetzin Malka,” Lipa responded that she is correct, but that he learned from the holy Kaliver Rebbe to do what he does in adapting songs and singing them.

“But he knew what kedushah meant,” Malkie said about the Rebbe.

“I am an ainikel of the Rebbe Rav Elimelech and the Bnei Yissoschor,” said Lipa. “I also know what kedushah is.”

This exchange took place in Yiddish. After the conversation concluded, Lipa translated the back and forth into Hebrew for the radio host and his listeners.