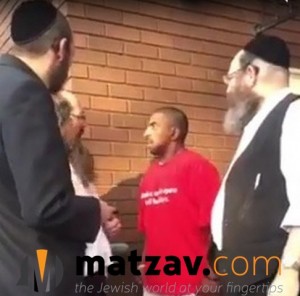 As reported here on Matzav yesterday, things got rowdy outside the Adass Shul in Melbourne, Australia, as a man – seemingly drunk – yelled at members of the local frum community, screaming , “Go back to Israel,” and making other comments.

The ensuing scuffle can be seen on the video at the bottom of this report.

The police were called and took away the man.

At one point in the video, after screaming, the shoe-less man appears to reach for a chossid’s throat, after-which the chossid wrestles the man to the ground, and others help hold him down.

According to the radio report, police arrested the suspect on charges of theft, criminal damage and assault after stealing a scooter outside the shul.

The incident was termed as criminal and not a hate crime.

Australian radio discussed the event and praised the Chassidim’s response to the man.

LISTEN TO THE RADIO REPORT BY CLICKING HERE.

WATCH THE VIDEO BEING DISCUSSED HERE: