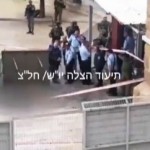 The wave of terror continues with another attempted terror attack. At around 1:30 pm, a female terrorist reached a checkpoint near the Meoras Hamachpeilah in Chevron in order to stab Police officers in the area. The terrorist was eliminated and there were no Israeli injuries in the incident.

The police stated that the female terrorist reached the checkpoint, aroused the suspicion of the Border Police in the area and was asked to show her ID card. After that, she suddenly drew out her knife and approached the fighters in the area while yelling at the soldiers. Afterwards, she was eliminated.