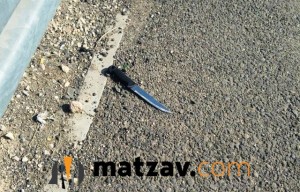 Earlier this morning, an attempted stabbing attack in the Samaria region was thwarted when a female Palestinian was approaching pedestrians at Brigade Square with a knife.

The Palestinian attempted to stab an Israeli civilian outside Sh’chem.

The attempted attack took place at a junction near the IDF’s Samaria Brigade headquarters in the northern West Bank.

The attacker was first run over by former head of the Samaria Regional Council Gershon Mesika and then shot by security forces at the scene.

“Forces and a bystander responded to the the immediate threat, shooting the attacker,” an IDF statement read.
{Matzav.com Israel}