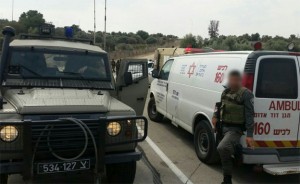 A Palestinian terrorist armed with a knife tried to attack Israeli police officers on Sunday at the Beit Einun Junction near Kiryat Arba. He was shot and killed by security forces.

No additional injuries were reported in the incident.

Yesterday, a terror attack was thwarted near Jenin. A security guard noticed an armed terrorist and called to him to stop where he was several times. When the terrorist did not respond, the security guard opened fire and neutralized him.

These two attempted terror attacks are part of the Knife Intifada that has been taking place in Israel in the past few weeks, mainly in Yerushalayim and Judea and Samaria. In most of the cases, the terrorists have been young Palestinians from East Jerusalem or Chevron. They have been implementing stabbing attacks against Israelis independently.