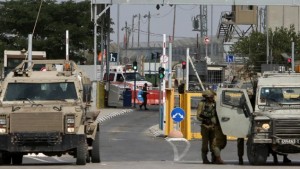 Two Palestinians attempted to stab a soldier at a a gas station adjacent to a crossing point in the northern West Bank Monday morning, police said.

One attacker was shot and killed and the second one arrested, a police spokesperson said in a statement.

There were no injuries among Israeli soldiers.

The attack occurred at the Gilboa/Jalame crossing on Route 60 between Israel proper and the West Bank, north of the town of Jenin.

According to the IDF, soldiers approached the two suspects at a gas station next to the crossing.

“One of the suspects then attempted to stab a soldier with a knife and was shot by the force.The second suspect was apprehended,” a statement from the military said.