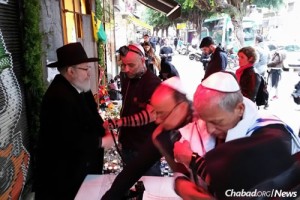 With a suspected terrorist killer still at large five days after opening fire at a popular restaurant/pub in Tel Aviv—resulting in the deaths of two Israeli men—a steady flow of people have been visiting the site of the attack, with thousands lighting candles, saying prayers and, for many men and boys over the age of 13, donning tefillin.

In the aftermath of the shooting that also left six wounded, Rabbi Yosef Shmuel Gerlitzky, executive director of Chabad of Tel Aviv, along with fellow rabbis and local rabbinical students, have been providing comfort, focus and a chance for Jews to respond positively to the tragedy. They are doing so by putting on tefillin and encouraging others to do so as well.

As a result, Gerlitzky set up the table at the very spot the attack took place, which is just a block or so from where Chabad usually has a tefillin station in place. The response, he says, has been overwhelming.

“Many more people than we expected have been coming in a steady stream just to put on the tefillin and make a blessing,” he reports. “On Monday, there was an extended line that didn’t seem to end, as men waited for the opportunity to do this mitzvah in honor of and in the memory of their murdered brothers.”

The victims were Shimon Ruimi, 30, of Ofakim, an Israel Defense Forces’ civilian employee; and Alon Bakal, 26, manager of the Simta restaurant and bar on Dizengoff Street, where the attack took place.

“We are still seeing them arrive at the site,” says the rabbi. “Jews of every kind—Ashkenazi, Sephardi, locals, tourists, religious and not-yet so religious—the entire gamut.”

He adds that “we even had a young man about 25 years old who had never before put on tefillin in his life. He was with a young woman, perhaps his wife, and when approached and asked if he wanted to put on the tefillin, he initially refused. Then suddenly, he changed his mind and said that wanted to. It was, effectively, his bar mitzvah.”

In addition to the work at the site, Chabad recently issued a special call for Israeli men to don tefillin because, Gerlitzky notes, they have a special spiritual power to deter terrorists and those who want to harm Jews. “The Rebbe would often explain that the laying of tefillin instills fear in the enemy,” he continues, citing the biblical verse: “Then all the peoples of the earth will see that the name of the Lord is called upon you, and they will fear you.”

Chabad set up a tefillin stand at the attack site.

Gerlitzky then related an inspiring story of the power of this particular mitzvah. “Today, I was reading the local paper, which carried a story about a man named Moti Adari. Now, Mr. Adari owns a shop adjacent to the restaurant where the attack took place, and he said that ‘in the zechut [merit] of my agreeing to put on tefillin at the Chabad table, my life was saved.’

“As Mr. Adari related: ‘Last Friday, an inner voice told me to close early before Shabbat and put on tefillin. I don’t usually do that. So I left my store and on the way happened by the Chabad table. One of the young men asked me, ‘Maybe you’ll be the tzaddik [righteous person] of the day by putting on tefillin in this freezing weather?’

“Just a few minutes after I closed shop, while standing by the Chabad tefillin table, the terrorist started shooting. Two people next to my shop were killed. I never experienced such a miracle. There is no doubt in my mind that in the merit of putting on tefillin and closing my store before Shabbat, my life was saved.’ ”

“And this,” stresses Gerlitzky, “is the power of the mitzvah of tefillin.”