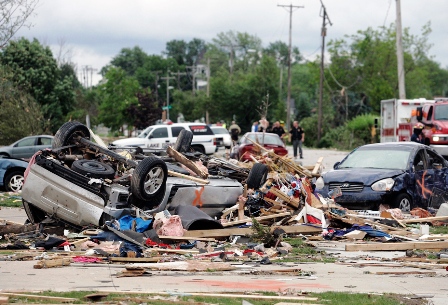 [Photos of the devastation here.] Strong thunderstorms battered the Chicago area and delayed the Bears game – but the worst damage was Downstate in central Illinois.

National Weather Service meteorologist Matt Friedlein said the agency confirmed that a strong tornado touched down near Coal City – around central Grundy County and far western Will County – with wind speeds between 113 and 157 mph. That EF-2 tornado was part of the same storm that produced the unconfirmed reports in Washington, Frankfort, as well as Dana, in rural LaSalle County, according to the weather service.

As many as 16 tornadoes touched down across the state from the southern tip, to as far north as Frankfort, near the Will and Cook county border, Friedlein said. Weather spotters near Washington, a suburb of Peoria, reported a funnel cloud touched down in the area Sunday. But crews were waiting for daylight to survey the damage and make a final determination, he said.