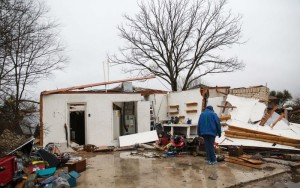 Deadly tornadoes and severe storms swept the South, Southwest and Midwest over the weekend and left at least 43 people dead.

A state of emergency was declared in New Mexico and Missouri, where rescue teams are battling flash floods and evacuating residents from their homes.

Flash floods in Missouri and Illinois have killed at least 13 people.

At least 11 people were killed in Texas by a series of powerful tornadoes, with some carrying winds of up to 200 miles per hour. Texas Governor Greg Abbott declared Dallas County and three surrounding counties disaster areas after up to 11 tornadoes barreled through the area and damaged more than 100 homes.

The governor warned residents to stay off the road on Sunday, when snow and ice caused whiteout conditions across parts of Texas, New Mexico and Oklahoma. Read it more at USA Today.